Below is another report pertaining to A2A2 content of Fleckvieh milk and that this also can have human health benefits – like the CLA discussed above.

The philosophy of Bavarian Bayern Genetik is to promote a dual purpose animal. There are many breeds that are dairy and will cross well with Fleckvieh. More importantly, going down the “dairy style road” and breeding for angular cows has been proven not to work in a commercial dairy. The sires imported by Big Bear Genetics, in collaboration with Bavarian Fleckvieh, are handpicked to be the type that will make long-lived, strong cows. These animals may not be the “attractive” angular dairy style cow, but will make money for the producer as they are long-lived, fertile, healthy and generally produce at the middle, or a bit above, the herd average. These sought after traits exhibited by the bloodlines of Big Bear Genetics is what sets Bavarian Fleckvieh apart. There is as much variation within a breed as there is between breeds. Many breeders of dairy cattle throughout the world share an attraction for the “angular” cow. Dairy cows with this style of breeding exist throughout the world. You can find the “dairy” look in any breed, even within the Fleckvieh breed.

Bavarian Fleckvieh – Bayern Genetik’s breeding philosophy is that only the toughest should survive. On our tour we visited the bull waiting and rearing station. It is located in Sachsen in the town of Boernchen. Bulls that are collected for initial evaluation are sent to this center for their growing and waiting period. They are grazed in the summer months and fed coarse grass hay in the winter. No grain, no silage and no high energy feed. A good number of bulls are culled in the waiting period as they cannot handle this type of nutrition and environment.  “They are not the genetics we want – only the fittest and best that can survive should go on to make large numbers of progeny” says CEO Dr. Thomas Grupp of Bayern Genetik. 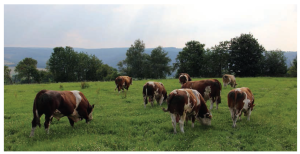 In the end, even the highest priced genomic bull has to prove his worth by surviving to become a progeny tested bull. Genomic selection alone is not the answer. As much as some like to think a computer model can do it all, the eye of a breeder and visual evaluation of breeding stock cannot be overlooked. The proof is still in the worth of the progeny tested daughters.

First and foremost, what the group learned was just because a cow carries extra muscle does not mean she cannot produce milk. Additional income from the beef component of dual-purpose animals is attractive to dairy farmers in Germany… and of course with these record high beef prices in the USA … it is also an additional source of income that is greatly welcomed.

The most notable difference the group discovered, was that despite tougher housing conditions than often seen in North America, the cows still performed well. Health management issues and transition cow problems are not as intensive in the Fleckvieh breed as they are typically more resilient. The slower onset of lactation along with a flat, persistent lactation curve eliminates some of the nutrition and management challenges.

It is typical for herds to have butterfat ranging between 4.0-4.2% and protein at 3.4-3.6%.  Milk production varied based on nutrition and management. Purebred herds with higher energy diets and good management had daily production of 73-82 lbs. per cow with high components. Larger herds on former collective farms in East Germany had milk production ranging between 58-70 lbs. Cows in an older facility, built in the 1970’s communist regime of East Germany, were tight for housing space and cow comfort was challenging, yet production was still 65 lbs. with components of 4.1 butterfat and 3.6 protein. These numbers show just how tough and efficient Fleckvieh animals can be. 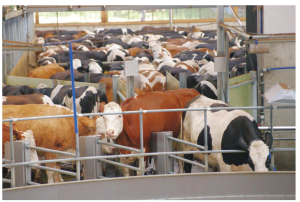 In Bavaria, we also visited a farmer co-operative that makes cheese from hay-based milk. Grass is harvested and dried down to maximize the quality either in the field or in a building if the weather is poor. Cows within the co-operative are only fed dry hay, beet pulp, approximately six to eight pounds of grain and no fermented feed. Milk production at the herd we visited on this diet was 60 lbs. The co-operative sets high standards for milk quality and all the herds delivering to the cheese plant have cell counts below 100,000.

While in Bavaria, we also visited a herd with production of 28,000 lbs/305 days. The farm is extremely well managed and the owner sells more than 50% of his fresh heifers as he always has an abundance of animals on farm and a strong list of buyers seeking his stock. We scheduled this farm as part of the tour, simply to showcase that Fleckvieh are capable of very high production. This visit clearly demonstrated that it is possible to produce milk and beef at a very high level. 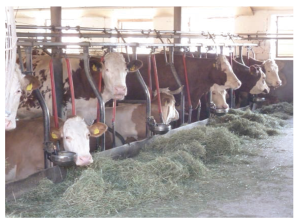 In summary, the Fleckvieh breed showed its ability to be adaptable to many different production systems. Since 1999, we have been instrumental in bringing Bavarian Fleckvieh to North America.  We strongly reflect Bayern Genetik’s vision on breeding and mating decisions. Big Bear Genetics is committed to the concept of dual purpose animals, despite criticism by the “dairy” type cattle promoters. Big Bear Genetics has stayed true to their goal of promoting the best meat and milk in a dual purpose animal.

Economics of dairy and beef farming