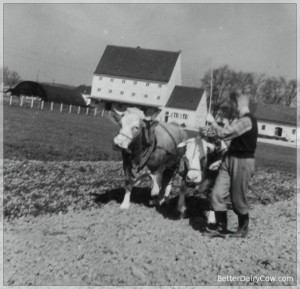 The most accepted theory about the history of Fleckvieh and the formation of the modern Fleckvieh animal goes as such:

A dark colored bovine animal that was related to prehistoric cattle was cross bred with other tame domesticated cattle, to form this strong and very large “germanic cattle” in Switzerland. Migration of people from other areas brought on a new mix of bloodlines to this now domesticated, tamed cattle.

The large boned “Swiss Fleckvieh” was influenced also by Southern Scandinavian blood lines. For 1400 years for sure, the Fleckvieh of the Simmental region in Switzerland was raised and bred. In the last 200 years, other genetic influences and movements over greater geographical areas led to more bloodlines. The original dark red, big boned animals with some white in the hair coat was the most useful durable agricultural animal.

The Swiss Fleckvieh came into Germany in the late 1700’s and was used as milk and meat producer but also as working animal (plowing the fields for example). Not only meat and milk, but also hide (leather), and farm work was in the rapporteur of the Fleckvieh animals. Many noble men throughout Europe in different regions begun to develop certain blood lines called “Schlag”. To get into the details of these is beyond the scope of this article.

Obstacles such as war and Rinderpest caused changes in the population dynamics and gene pool over the years.

Onward and upward it went around 1830, when more Feckvieh cattle were coming into Germany from the Simmental area. The main person who did imports from Switzerland on foot on an annual basis was Max Obermeier of Gmund am Tegernsee. He brought cattle from the Simmental in Switzerland to his area for 50 years.

The genetics were spread from this importation to the various regions in Germany. This time marks the official breeding of the “German Fleckvieh”. Early dairy herd management involved crossbreeding in three main regions was started: Royal regions of Bavaria, Baden and Wuertemberg.

By the time the 1900’s rolled around, the breeding of the original Swiss Fleckvieh throughout Europe made it the most common breed of cattle. Because of their original region being the Simmental in Switzerland, the name “Simmentaler” cattle was used instead of Swiss Fleckvieh.

Milk production was measured and on average of 7000 liters, with high milk yielding cows all the way up to 12000 liters in a 365 day period was determined. Also milk fat ranged form 3.88% to 4.13%. In terms of meat production, it was observed that animals had huge bone mass and meat yield because they were being bred for being in the mountains.

This history of Fleckvieh has given rise to the breed goals of optimizing the meat and milk yields. The dual purpose Fleckvieh found today to assist in dairy herd management.

This makes it so that the animals can be handled and kept in all kinds of barn systems or grazing systems.

The History of Fleckvieh in Canada and USA

As a youth, Werner Popp ( 10.10.1940 – 30.03.2007) raised Fleckvieh cattle on his grandfather’s farm in Germany. He is seen here working the fields with Fleckvieh cows in the Oberpfalz region of Bavaria near Hirschau. In 1983, Werner moved his family to Canada and started farming cattle and some grains.

Recalling the benefits of Fleckvieh from his youth, Werner started a working relationship with Bayern Genetik in the year 2000, to introduce dual purpose genetics of Fleckvieh to the North American continent.

Now his two sons Max Popp of BetterDairyCow, and John Popp of BigBearGenetics, are working together with the goal of improving animal welfare and better dairy farm efficiencies with the strength of Fleckvieh Genetics.