Since the establishment of the Fleckvieh breeding 1830, careful selection for individual traits has been promoted and enhanced. For 60 years, the agricultural ministry of the state Bavaria has created some key criteria that have to be met in order to qualify as a proven sire in any of the artificial insemination centre bulls so they can qualify for farmer use. 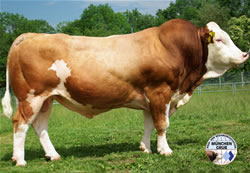 After evaluation, ongoing quality control and progeny testing, the semen becomes export eligible and the semen of already proven sires is sent to the farmer into countries all over the world. Of particular note is the fact, that two of the bulls, Wallenstein and Ilion (www.fleckvieh.de) are animals that promote muscling and milk production.

When crossbreeding with another breed – for example Holstein Friesen it becomes evident that 50% percent of the genetics are contributed maternally and the other half paternally. The end result is that as a result of hybrid vigor the desired traits become more expressed in a great percentage of calves.

Increases in fertility are seen not only because of crossbreeding dairy breeds, but calves also tend to have more longevity because of the direct hybrid vigor that they posses. An increase in pregnancy rates occurs which helps to reduce heat detection efforts and reduces labor. Research conducted at the U.S.

One of the largest dairies in the province of Manitoba in Canada with 10 years experience in using Fleckvieh semen for breeding exclusively reap the benefits of improved fertility. Through selection and enhanced fertility due to heterosis this farm can finally do ‘voluntary’ culling.

For example an animal that is bred on the first heat post calving will produce either a heifer or a bull, then when she is rebred after about a 300 day lactation, she is again going to have another male or female calf. She will have replaced herself at this point. Her own age may be such that she will either continue in the herd as milking cow or if the farmer wishes he/she can remove an undesired animal without losing herd size and productivity.

This demonstrates one of many benefits that semen use with the affects of heterosis and creation of good quality calves has a long term benefit to production. The German Fleckvieh dual purpose bulls Ilion and Wallenstein fit well into this idea as they enhance muscularity and strength, while ranking high in fertility.

It has also been demonstrated that an even greater improvement in fertility is seen when it comes time to breed the crossbred cows. Closely monitored US herds using Fleckvieh have shown improved retention rates of cows to three and more lactations and overall herd longevity using Fleckvieh in crossbreeding systems.

Again, the sires selected for strength and longevity perform significantly better than those selected with a focus on milk production. It appears that higher muscularity scores along with lower frame scoring, good udder height and feet and leg scores are most important for successful long living high milk yielding dairy cows.

A bull that was an absolute pillar for these traits was Enrico. His daughters are producing good herd average milk production with good fertility and longevity.

A philosophy long shared by breeders of Bavarian Fleckvieh. Conclusions made by Big bear genetics – connected with BDC.com

We (Big bear genetics – BDC) are encouraged to see the results of published research. Genetics is such a long term investment and we really only know the outcome of a breeding decision 5 years later. As such we encourage you to learn the sires you are choosing. We can offer data, as well as put you in contact with farms that have been using Bavarian Fleckvieh for ten years now.

Buying of the young sires as done by Bayern Genetik in Bavaria:

What Everyone Ought to Know About Fleckvieh and Genomics